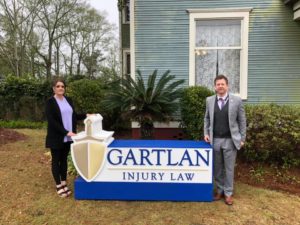 For Gartlan Injury Law paralegal Candice Hemenes, personal injury law is a calling and a chance to offer potential clients the compassion and respect they deserve.

She’s been where they are, after all.

An Alabama native and graduate of Slocomb High School, Hemenes in 2009 lost her father, J.D. Peacock, at age 69 during surgery for esophageal cancer that uncovered a heart issue. Hemenes paid hundreds of dollars to obtain her father’s medical records and found enough to validate her suspicions of malpractice, but there wasn’t enough evidence under the law for a firm to take on her case.

Her sadness and frustration led her to pursue a paralegal degree from Everest University, setting her on a path that brought her to Gartlan Injury Law in 2014.

“I couldn’t help him, but maybe I could help somebody else,” she said.

As a paralegal, Hemenes works each case from intake to settlement. She also does administrative work such as finding doctors willing to treat clients without insurance with the promise that they’ll be paid upon settlement.

“There are so many people here without insurance, and we have to get them medical care,” she said.

Hemenes admires how personal injury attorney Aaron Gartlan came from humble beginnings and paid for his own education. “Everything he’s accomplished, he’s really had to work for,” she said. “He’s really passionate about what he does—and I don’t think I could work for someone who isn’t.”

When Hemenes meets clients, she forges a connection by asking about their children or other parts of their lives. She also gives them her cell phone number should they have questions or need to vent. “All of my calls are returned the same day, within hours if I can,” she said. “I don’t like people getting frustrated and not knowing what’s going on because I’ve been in their shoes.”

Clients appreciate that so much that some stay in touch long after their cases are resolved. “We build a lot of relationships,” Hemenes said. “They become almost like family.”

When not at work, Hemenes enjoys spending time with her two children, visiting the beach, crafting, and gardening.

As for her caring style, it comes naturally.

"The Gartlan firm was great to work with when I had a rear end collision. Professional and clear about the process of getting myself and my car fixed. It's a hassle to be involved a wreck and not feeling well makes it harder. Candice at the Hogg and Gartlan firm was kind and understanding and worked so hard to handle all the aspects of getting myself and my vehicle back in working order."