If I Was Partially at Fault, Can I Still Recover Damages in My Personal Injury Claim in Alabama? 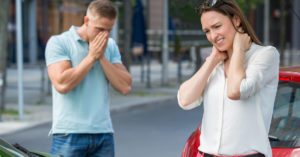 People can sometimes be partially at fault for the accidents that cause them to suffer injuries. For instance, someone involved in a slip and fall accident may not have been wearing the appropriate footwear for a certain situation, or a driver may have contributed to an accident by speeding. In legal terms, this fault is known as contributory negligence.

Most states still allow accident victims to claim compensation even if they were partially at fault for their injuries. Alabama, unfortunately, is not one of them. In our state, even if an accident is one percent at fault for his or her accident, the victim may be barred from receiving any compensation at all. Due to this law, it is crucial that accident victims speak to an experienced Alabama personal injury lawyer who will protect their rights and seek all compensation which they are due.

At Gartlan Injury Law, we work hard to investigate cases. By gathering the facts, we are prepared when insurance companies try to shift fault to our clients. To discuss how we can put our approach to work for you, contact us today and receive a free consultation about your case.

Why Does Fault Matter in Personal Injury Claims?

Fault matters in all personal injury claims in Alabama. In order to claim compensation, you must prove that someone else was at fault for your accident. This holds true in Alabama for car accidents as well.

Additionally, in some other states, the law allows accident victims to recover compensation as long as they were less than 49, 50 or 51 percent at fault, depending on the model of contributory negligence which the state follows. Alabama follows a pure contributory negligence model. When an accident victim is even one percent at fault for the crash, the victim can be barred from receiving any compensation at all. For this reason, insurance companies will almost always content that the accident victim was at least partly to blame for his or her injuries. The insurance company wants to avoid paying any compensation.

Are There Any Exceptions to Alabama’s Contributory Negligence Rule?

As harsh as Alabama’s contributor negligence rule may seem to be, several exceptions exist. Those exceptions include:

All of these exceptions allow certain individuals to still claim compensation when another person causes an accident. At Gartlan Injury Law, we can examine all aspects of your case and look at whether contributory negligence may be a factor and, if so, whether one of these exceptions may apply.

How Can You Prove Fault in Personal Injury Claims?

To establish that another person was at fault for an accident in Alabama, you must prove four basic elements. Those elements are:

To prove these elements of a negligence claim, you will need several types of evidence. This evidence may include photos, police reports, physical evidence from the accident scene and medical reports.

How Can an Alabama Personal Injury Lawyer Help with Your Case?

Due to the fact that Alabama’s contributory negligence rule bars accident victims from claiming compensation when they have contributed to the accident that caused their injuries, it is essential that you speak to a personal injury lawyer in Alabama that can help with your specific claim.

At Gartlan Injury Law, we are committed to helping accident victims, and we want to help you, too. We will know how to counter any arguments that you were partly at fault for your accident and pursue full and fair compensation on your behalf. Contact us now to review your case in a free consultation.

"Very pleased with the service I received. Candice, as she consulted with Mr. Gartlan, was able to keep me abreast of the process and my claim."